The World Para Table Tennis Championships take place every four years and will be run under a different format with the competitions played as a straight knockout rather than initial group stages. Team events have been replaced by doubles – men’s, women’s and mixed – with the category for pairs determined with a maximum number obtained by combining the classification numbers of the two players.

Stacey reached the quarterfinals in men’s class 9 on his Paralympic debut in Tokyo and has since gone from strength to strength, taking gold in Spain, Czech Republic and Greece and winning his first major title when beating the Chinese-born Australian former World and Paralympic champion Ma Lin to take Commonwealth gold in the men’s class 8-10 singles in Birmingham. The 22-year-old from Cardiff will also compete in the men’s doubles with Ross Wilson and the mixed doubles with Grace Williams.

“Tokyo just gave me so much motivation,” said Stacey, “knowing that the Paralympics are only every four years but every year there is a major which is really good in terms of wanting to do as well as you can. I feel that my level and my mindset have gone up nicely in correlation and it is translating quite well on the table and I’m hoping it will do the same in Spain. Major championships are what you strive towards and I feel I’m in a good position to show what I can do and I’m really excited. I feel like I’m improving week-on-week and to feel confident in how I’m playing and also confident in terms of my mindset is exciting but also quite settling. I feel that I can think my way through a match if things aren’t going as well as they could do and that is something that can be used in any stage of the competition.

“It is very special and a privilege to have been selected for the doubles as well and they are a nice goal to chase other than just the singles. When you are on the table with someone else you’re playing for them as well which is always a good thing and I think it also brings together that family vibe we have created in the team so I enjoy playing with both Ross and Grace.”

Former World number one and Rio 2016 gold medallist Davies won his fourth consecutive European singles title in 2019 but was unable to defend his men’s class 1 Paralympic title in Tokyo due to injury. Having not competed for more than two years the 38-year-old from Brecon is still working his way back to his best form and fitness but won gold in Finland in September.

“I’m looking forward to going to the Worlds,” he said, “and being back amongst all the guys I’m used to competing against. I can still go out there and cause an upset and I’ll be playing with no pressure and just trying to play my game. I’ve got a lot of experience and I’m going to have to use all of that this year to try and get some wins in Spain – the Worlds is the one title that has escaped me and I’m going to do my best and see what happens. It is all about Paris for me and building towards that. Obviously I’m excited to be going to the Worlds but for me it is just a stepping stone really and my thoughts are in the future but I need to take one match at a time as that is how I’m going to improve. That is what I’m going to do and I’ll hopefully have some positives to take out of it looking towards next year. It’s good to be back playing again after such a long time out due to the injury and I’m grateful to be back on the table again and pulling on the GB shirt so I’ll get behind my teammates, do all I can and enjoy myself.”

Matthews took men’s class 1 bronze in the World Championships in 2018 and bronze in Tokyo on his Paralympic debut last year. The 30-year-old from Aberdare has been focused on training since taking bronze in the Czech Open in June.

“Four years ago it was my first World Championships and I didn’t really know what to expect,” he said, “but I’ve done other majors since then including the Paralympic Games and that is the pinnacle of the sport so I feel a bit more relaxed going into this one and I’m really looking forward to it and can’t wait to get out there. I’ve got a good record in majors but sadly they are only bronze medals and I want to change that colour so we’ll see. Training has been going really well – I’ve been working hard and I feel that I’m a better player than I was in Tokyo and I got a bronze there so let’s see what I can do in the World Championships. Straight knockout will be psychologically more difficult for some players than others – I’ve been working a lot with my psychologist and I feel I thrive at the majors so I’m going to take confidence from that and hopefully put on a good performance.”

Karabardak also won singles bronze in Tokyo, his first Paralympic medal at his fourth Paralympic Games. He went on to take silver with Will Bayley in the men’s class 6-7 team event, beating the class 6 World number one in the deciding singles in the semi-finals, and has won gold in Argentina and silver in Finland this season. He will also compete in the men’s class 14 doubles with Billy Shilton. 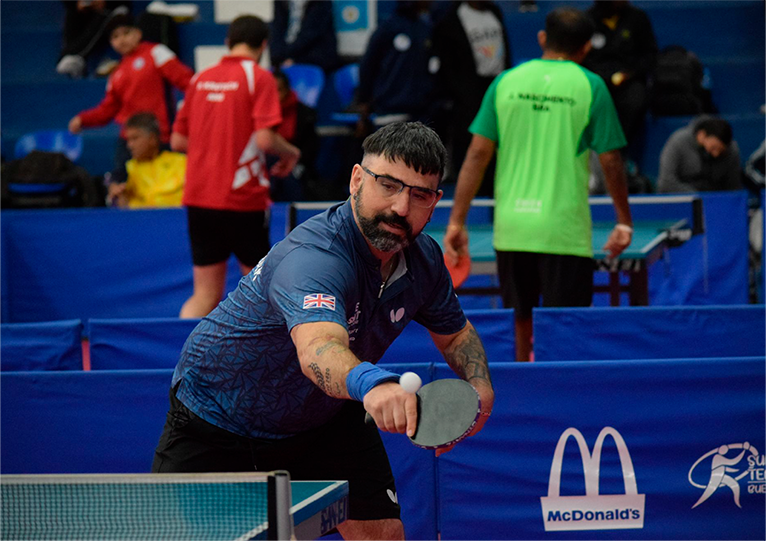 “I’ve had a good year and done well,” said the 37-year-old Swansea City fan. “I’ve maybe not been at my best but I’m playing well at the moment so I’m really looking forward to seeing what I can do at the World Championships. Tokyo was fantastic and it has given me a lot of confidence and belief that I can win on the big stage and beat the best players in the world in the big matches so I think I can take a lot from that to give me confidence going into the Worlds.  The only thing I haven’t won is a World singles medal and it would be very special if I could get that and have all the medals then. I’m also really looking forward to playing doubles with Billy – we played together years ago and to come together again in the Czech Open was really nice, especially to win the gold. Billy is playing really well and he’s a top player now, so it is exciting because I think we have a great chance to do really well in the doubles.”

“It is really exciting especially because I wasn’t expecting to go,” said the 19-year-old from Llanfyllin, “and I’ve got a wild card so I feel really privileged to get an opportunity to go and show what I can do. Sometimes I feel I don’t deserve it but I’ve been given the chance and I’m going to take it. Playing doubles is really helping me to develop as a player individually because I get to have that reassurance with Fliss and Josh – they help me and that helps my singles game as well. The nerves are still there but it is about managing them – the Worlds is my first major Para championships, so we’ll see how it goes but I’m looking forward to it.”

Posted in Competition
We use cookies on our website to give you the most relevant experience by remembering your preferences and repeat visits. By clicking “Accept”, you consent to the use of ALL the cookies.
Cookie settingsACCEPT
Manage consent